The Arches of the Pelvis 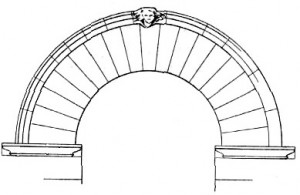 An arch is a curved structure capable of spanning a space while supporting significant weight. When you have two pillars that fall towards each other and in the middle of those two pillars falls a keystone, we have an arch. The keystone of an arch is a stone or in our case a bone, that is thinner at the bottom than at its top, therefore wedging itself strongly into the pillars.

The pelvis is made up of three bones. The two hip bones with the triangular shaped sacrum in between them. In the pelvis, there are three functional arches. I should say there are two arches and a buttress. The first arch is the two hip bones with the sacrum as the keystone. The second arch is the two pubic bones with the pubic symphysis as the keystone. Third arch, which is technically a buttress, is the pelvis falling into the two legs. Why it’s called the buttress is because there’s an angle here where the femur turns and the neck leads into the head of the bone

Let’s say we have an arch in space; if I put 20 pounds on that arch, it’s a strong arch. If I put 100 pounds it’s actually a stronger arch. The more weight you put on it the better. But what if I put that weight on it on an awkward angle? If the weight is at the front of the arch, the arch wants to tilt backwards, if the weight is to the back of the arch, the arch wants to tilt forwards. Only when we place the weight right on top of the arch are we going to find that proper distribution of weight.

That is why we need to get our legs under and our head over our pelvis. When the butt is tucked under too much there is no way the weight of the upper body is falling evenly into the arches of the pelvis. The weight falls behind the arches forcing the thighs further forward. When the legs are situated directly under the pelvis as per their design, energy transfers directly through our bones into the earth.

Birth of the Kegels
Six Pack Abs, or Why Hard Muscle is Bad