How Do I Love Eufy?

One Minute Anatomy: The Lumbar Spine

My life among dogs began in childhood with the family dog Opie. The first dog I got on my own was Ingemar, named for the boy in Lasse Halstrom’s My Life As A Dog. Rupert joined her and they both hung around for 16 & 14 years respectively.

Lena & Ollie arrived next though Lena came to an early end at 8 due to cancer. Ollie, who actually became a much better dog once he was free of Lena, lived to a respectable 14.

With the exception of Rupert who was a purebred Dalmatian and came from a store, they were all rescue dogs from the pound that adjusted to their new lives’ immediately. 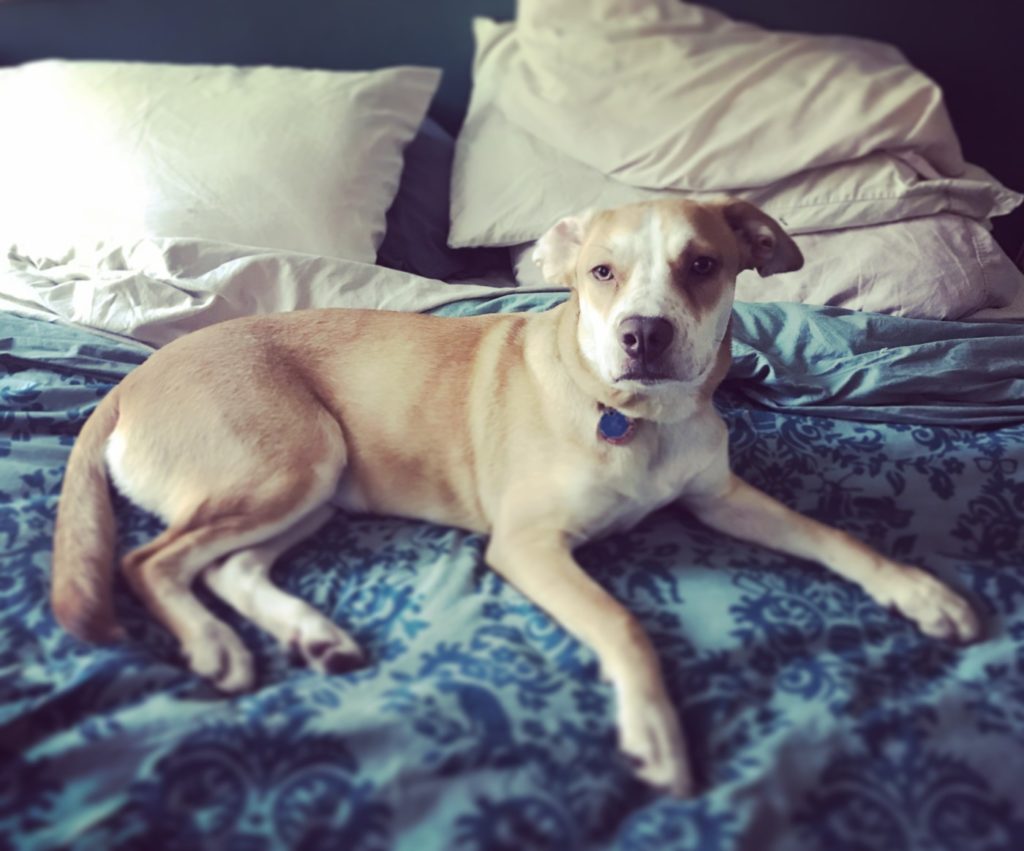 We live in Brooklyn, where I was born and raised, and I have been going to Prospect Park my whole life. A very early memory is getting up at 5am on Sundays with my father so I could try to learn how to play hockey at the parks outdoor skating rink.

Later, after growing up in a fairly insulated part of Brooklyn I went to high school and met people from Park Slope who expanded my little world. And that brought with it a very different kind of experience in the park.

Now, for the last twenty years one of my most consistent practices has been walking the park with my dogs.

Lena, mentioned above, was a bit aggressive with other dogs so I had to be at the park before 7 when very few people and dogs are around. The emptiness, silence, and often mist, of that hour made it easy to go inside and get quiet.

There is something altogether else about the sea of people and dogs on the great lawn around 8:15. So many dogs, so much joy. I enter the park from the side with the least amount of dogs so crossing the park brings more and more and then more dogs. It is hard not to be happy in such surroundings. 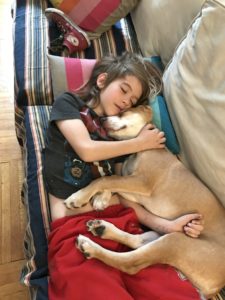 Fanny seemed like a normal dog when we met her at the local pound. Both of our cats came from the same shelter and even though they came from a hoarding situation where they were two of fifty-four cats found in a one-bedroom apartment they were profoundly content and well-adjusted within days.

Fanny on the other hand refused to go outside.

The only way to housebreak her was by carrying and putting her down on the sidewalk, which is a pain in the neck when you live in an apartment building. Learning to do her business outside though was fairly easy—she picked it up like a pro within a week.

But soon as she was done, and many times before, she pulled to the point of choking herself, to get back inside as quickly as possible.

Also, she is terrified of people, barks incessantly at guests and, in her only nod to normalcy, has trashed shoes and pillows and stuffed animals and one baseball glove.

Simply put, we got ourselves one deeply traumatized dog.

When we met Raymond—the trainer who would change her life and ours—he looked at us with a mix of honesty and guile and said, “I just have to tell you she is what I call a money dog. This kind of dog is how I make a living. She’s a money dog.” 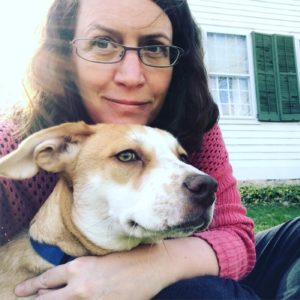 It was intense trying to walk her. If she wasn’t carried the only way to get her outside was to drag her. When inside she took treats but the minute we left the apartment she shut down and wouldn’t take treats or walk—she just pulled to go home.

If you have been reading this blog for a while this behavior might sound familiar. When is comes to people I describe it as being stuck in the sympathetic nervous system.

We met Raymond in prospect park at a doggie play group where he corrals twenty something dogs with his partner Joanie and the help of others.

He was hired even after the dire threat to our checkbooks, as we were truly people with no clue what to do about a dog we couldn’t turn our backs on.

Raymond came to our house and has taught us so much and has changed Fanny to the point where I have gone on hour-long walks with her sans freak-out. 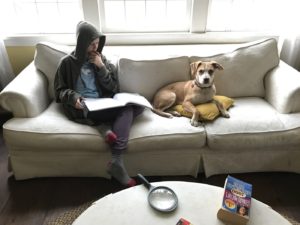 I had noticed previously and then Raymond pointed out that our traumatized Fanny wasn’t using her nose when she was outside and relied on her eyes and seeing instead of smelling.

This was his indication that she indeed stuck in her nervous system, living in flight or fight mode any time she left the house. With patience and perseverance ( and a little tough love) Raymond had her sniffing around and taking treats outside.

I have written before about sighing and the nervous system and Raymond shared with me that for him success in our sessions was about seeing Fanny yawn or even better, shrug off like she was shaking off water.

Watching Raymond session after session doing therapy on Fanny, which is the only way I can describe it, has been a gift to witness.

The effects on Fanny have been profound. Where three months ago a loud noise would send her into a long tailspin, now she just fishtails for a second and gets back on track.

When people come over now they might be able to touch and pet her if they take it slow and give her to space to approach on her own.

It didn’t happen overnight but Fanny is a much more relaxed dog. She is still nuts. And still barks too much and is too wary of people. But amazingly, I think we have a great dog on our hands that requires more TLC than I am used to affording a puppy but I am up for the task.