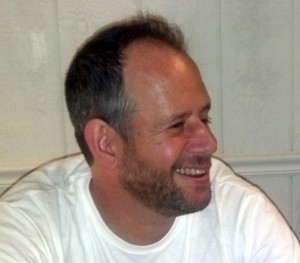 I am giddy about the prospect of turning fifty having arrived at this moment in remarkably decent shape; I move with ease and feel very solid. At the same time I have chronic hepatitis C and was told just this week that my liver was overtaxed- which for someone like me is the price of excess.

Born in the beginning of spring, every birthday heralds the change and rebirth inherent in nature and possible in humans. I intuited early on that resistance to change is futile mine has been a life of going with the flow, shifting from role to role in a half-hearted search for permanence.

I feel like the luckiest person alive. Here I am turning fifty and I have parlayed a life of quitting, missteps and failure into a wife and children that I cherish and a job that serves both me and the world. If I was just a tiny bit crazier I would laugh out loud at the thought as I sit here alone in my office.

The quitting, missteps and failure portion of my life, which I take great pride in, was about the willingness to write my own story by following no one’s rules but my own. And I had no rules. I knew that I wanted to “be” an artist, and I made lots and lots of all kinds of art– decently for an autodidact that never had any clue what he was doing in a technical sense.

But I never had any real interest in the work part— the day to day commitment to grind it out till you master a craft.  I simply didn’t care enough and left all the art behind when I started doing and teaching yoga. Having stuck with yoga and now walking for almost twenty years (I started at 32) I have finally found something to take me over and fulfill me, even though I resisted becoming a yoga teacher. Cyndi Lee, who so kindly gave me my first teaching job, had to yell at me on the phone six months after my training ended in order for me to finish the training and start teaching (Thanks Cyndi). There is a certain measure of sloth in my DNA.

And maybe I am projecting but I see it in my daughter who is only seven. Ida takes karate having a great time while paying little attention and getting taught less. My wife and I don’t push her (what is the opposite of a tiger mom?) and a couple of days ago I delivered this lecture to her when we walked out of the dojo.

“Ida, I have to say that I watch you in karate and while you clearly have a lot of fun you aren’t doing what they ask of you and while they bear some responsibility in that, it is your job to care. But I also have to tell you that I see a lot of you in me and I half-assed my way through life for fifty years now and the problem is I can’t tell you not to do what you are doing in good conscience because I have had a lot of fun and I love who I am and where I am at.  But, there are times when I wish I had learned and excelled at something early on. And I just want you to know that you still have that choice and I will support you whatever road you take”

She looked at me and replied as she often does “blah, blah, blah.”

I looked at her and thought, what have I got you into?

At my wedding party when I was already in my forties my father went around to every guest or group of guests and announced, “We never thought he’d make it to twenty-one so this is a miracle.”  It wasn’t much of a miracle in truth. I was simply a very spoiled middle class kid who knew that no matter the level of trouble he got into his parents would always bail him out, literally and figuratively.

For a decade from the age of fourteen I was a hard-core drug fiend and petty thief, excelling at the former and failing at the latter. My behavior could easily, and probably correctly, be ascribed to a distant father and overbearing mother but I also think that I was looking for adventure and all the fun seemed to be happening in the shadows. Plus, the late seventies in Brooklyn was a heady time to grow up if you were interested in altering your mind and getting into trouble.

In elementary school all of my report cards said the exact same thing. Jonathan is a conduct problem who fails to live up to his potential. Boy did they have me pegged. In junior high school attempts were made at correction. Mr. Malin made me stand for six months and Mrs. Harris suggested I shove a screw up my ass and rotate around on it. Mrs. Rates made me…

High school on the other hand was a surreal moment of bliss. My mother wanted me to go to a special school which I reluctantly agreed to. Edward R Murrow High School in Brooklyn made the mistake of treating me with respect and trust. They had this notion about dealing with fourteen year olds like college students. I returned that respect by never going to class. I ended up going to three high schools without really going to any of them and finally left school officially at sixteen to travel around the country selling bootleg t-shirts at rock n roll concerts. I was living on the road in a van with a number of other misfits. When I was in Brooklyn I squatted on the floor of a foul one bedroom apartment on Ocean Avenue that housed anywhere from seven to twelve guys along with a couple of dogs and a cat.

I have always been a bit of an alienated mess, attracted to darkness in art, literature and my life. And without being too melodramatic I have never understood why I am here or what I am here for. Life has always seemed to be a puzzle about creating an illusory meaning for existence.  I have always seen life as a game about wasting time; something to get through. Meaning is relative and everyone’s construct of reality is valid and no one is more right than anyone else (except for me of course). This amorphous early conception morphed into the nihilism of my teens and twenty’s before turning into the non-attached yogic bliss that is my adulthood. The cool hard detachment of youth is somehow now seen as empathy and compassion though I don’t think I have changed (well maybe a little).

As a lazy young aspirant I wanted to be a writer and a filmmaker and though I didn’t turn out to be the next Billy Wilder, it doesn’t escape me that thirty years later I am making a living (if you buy my videos)  writing and making movies in whatever form they take.  I never cared a whit about money as a young man and don’t care much about it now which can get complicated with two children but everything is complicated. As it worked out, the friends I grew up with that were interested in money, ended up with money and those who weren’t,  didn’t (so far)— which seems reasonable to me.

When I found yoga, the asana practice seemed egoistic if not narcissistic while the karma yoga of service seemed to offer a path that was more grounding for me.  My first girlfriend died of aids due to the complications of our wild childhood, and as she got sicker, she asked me to work with other people in a similar place because most people couldn’t deal with what she was going through.  She was dying—why not talk about it?  This led to a stint as a hospice volunteer until another dear friend died of cancer and seeing him through seemed to be the closing of a circle and I moved on from that world.

Teaching walking has provided me a way back into the world of service. The idea that I might spend the rest of my life hanging out with my family and helping people out of back pain seems like an extremely right life. I have never had much ambition though I am loaded with drive, like a modern day Ralph Kramden with lots of schemes but little wherewithal to see them through.

The beauty of the life that I have created for myself is that it serves my neuroses while serving me as well. I am not all that good at people and the world as me. When I put on my teacher persona, I rule. Take it off and I am weird me again. A long-time friend who recently began taking my class remarked on my two faces- the one who shows up when class begins and the one that retreats into a shell the second it is over. But as a control freak I need me on one side of a room with a solid wall between me and the world.  I have managed to make this happen in so many ways. As a photographer with the camera as shield; as a theater director with me on one side of the room and the cast on the other; even as a waiter but yoga teaching fulfills this best. I get to act and then retreat. And it is really quite fulfilling.

If you believe in karma, and I do because I believe in everything (and nothing), we are truly lucky to be blessed with a human birth and should try and make the most of it in the effort to get off the reincarnation roller coaster. I probably got knocked down a peg with some of my behavior in the first forty years but now I am working on serving a world I always expected to serve me.

My whole life has been led by the edict that whatever the conventional wisdom is—I’ m against it. This has served me incredibly well allowing me to live a life of my own design. And now I have made it to fifty. Thanks for sharing this latest part of the journey with me.