What are the Hamstrings? 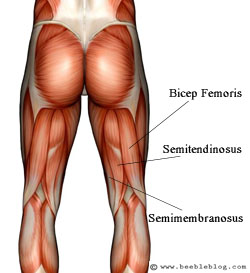 At the back of the leg behind the thigh there are three muscles known as the hamstrings.  These muscles have a lot to do with how flexible we are. The three muscles, semitendinosus, semimembranosus, and biceps femoris (which has two heads) flex the knee and extend the hip (except for one head of the biceps femoris). The hamstrings also cross and act upon the joints of both the hip and the knee.

We are looking at three muscles with four attachments. They all insert on the tibia and fibula of the lower leg crossing and essentially shaking hands with the muscles of the calf as they pass each other on the way to insert on the femur (thigh bone). They all originate on the ishcial tuberosity, or the sitting bone, of the pelvis. But one of the heads of the biceps femoris originates on the femur bone itself.

The hamstrings are essentially involved in many of our daily activities, including walking running and jumping. Their opposing muscle is the quadriceps and together they determine a good measure of our grace and flexibility.

The painful fact is that many people have very tight hamstrings. Poor posture is the main reason I see for hamstring tightness though our tendency towards a sedentary lifestyle doesn’t help. An active existence that includes a lot of manual work—bending, squatting, and lifting with correct alignment can keep our hamstrings and body in decent shape but those types of action have disappeared from so many lives.

As always, it comes back to posture. Most people think that tight hamstrings are tight in an up and down way—in other words, I bend forward and the hamstring tries to lengthen but there is no give. This is in fact what occurs but I think it is happening due to a slightly counter intuitive issue. The length or lack thereof, is to due to the hamstrings geographic relationship to the femur bone and this is what determines its ability to stretch up and down.

Consider that the hamstrings attach on the pelvis and the shin without really touching the thigh (with the exception of the oft mentioned short head of the biceps femoris). What this means to me is the spatial relationship of the hamstrings to a bone they don’t touch determines its tightness.
When we stand with the pelvis tucked under two things happen.

The sit bones move closer to the knee which shortens the resting length of the hamstring.

Tucking the pelvis forces the thigh bones forward as the hamstrings stay where they are getting pulled backwards away from the femur bone.

Untuck the pelvis, rotating it to a neutral position, and the femur bone will move back in space closer to the hamstring. Over time this will allow for more room for the muscles to lengthen.

Another key issue is the misaligned quadriceps muscles. If the quadriceps is out of alignment because of the tucked pelvis, they are likely overstretched in relation to the tight hamstring. Rotating the pelvis to neutral and getting the thighs directly under the hip will improve the relationship of the quadriceps and the hamstrings giving both the opportunity to find their proper length and tone.

A Pulled Muscle
I've got your back.